Key takeaways from the Economic Survey of 2020-21

The Survey expects the Indian economy to grow by 11% in real terms (adjusted for inflation) during 2021-22. This is close to the growth of 11.5% forecast by the International Monetary Fund (IMF). This is good news.

The gross tax revenue earned by the government during the period April to November 2020 fell by 12.6% to ₹10.26 lakh crore.

Other than gross tax revenue, the amount of money the government expected to earn through the disinvestment route, by selling its stake in public sector enterprises, has taken major beating this year. Of the targeted ₹2.1 lakh crore, by 20th January, 2021, the government was able to earn only ₹15,220 crore through this route, or around 7.2% of the targeted amount.

The fiscal deficit of the union government for 2020-21 will be much more than the deficit of 3.5% of the GDP which was projected at the time of the presentation of the budget for this year. A look at the numbers tells us that the deficit should be close to 7% of the GDP.

Between April and December 2020, the foreign institutional investors have net invested a massive $30 billion in buying Indian stocks, which was five times the amount invested in 2019. This has been one of the main reasons driving the stock market to very high levels, not justified by the future expected earnings of companies.

An important point that the Survey makes is that of the Indian economy recovering during the second half of this year.

The government consumption in the second half is expected to grow by 17%, after contracting by 3.9% during the first half.

Private consumption, which forms more than half of the Indian economy is expected to contract by 0.6% in the second half, after having contracted by 18.9% during the first half.

Over and above this, investment in the Indian economy is expected to contract by 0.8% in the second half of the year, against a contraction of 29% in the first half.

Some sort of recovery during the second half is also visible in the increased collections of Goods and Services Tax (GST). The monthly GST collections in December 2020 stood at ₹1.15 lakh crore or 12% more than in December 2019.

One of the key economic trends this year has been high inflation. Inflation as measured by the consumer price inflation between April and December 2020 stood at 6.6% in comparison to the previous year. This has been on account of high food inflation of 9.1% 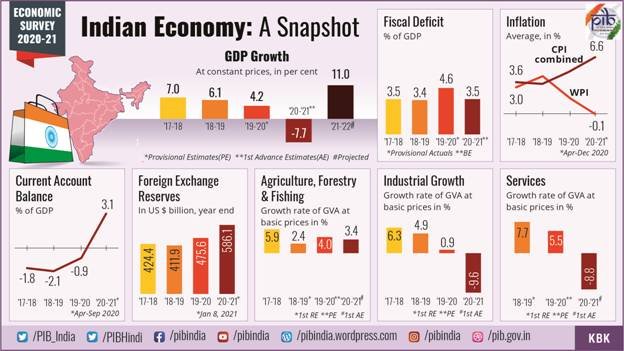 Thank Your For Your Valuable Information